Former students of the Wits Centre for Journalism’s Honours Programme are making waves in the field of journalism and arts in South Africa.

This year, Naledi Mashishi and Shandukani Mulaudzi were named in the Mail & Guardian’s Top 200 Young South Africans – an honorary title given to young South Africans pioneers in their respective fields, while Onke Ngucka was honoured with the 2022 Sikuvile Award for upcoming/rising journalist of the year. 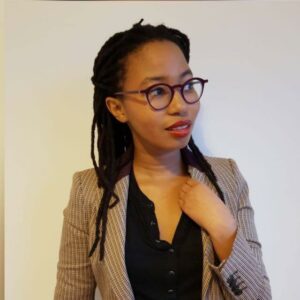 Naledi Mashishi, a finalist in the Sunday Times 2022 Literary Awards completed her Journalism Honours Degree at Wits Journalism in 2018 and interned at Reuters the following year. She was recognised in the Arts and Entertainment category of the M&G200 Young South Africans for her work as a fact-checker at Africa Check especially during the Covid-19 pandemic when misinformation was rife.

She also effectively made use of Twitter thread to debunk common myths making the rounds during Covid-19.

In 2021 she was named by Democracy Works Foundation as an African woman promoting democracy in her country.

In the same year, she wrote and published her debut novel, “Invisible Strings” which tells the story of a young African woman, who develops otherworldly powers, and her attempts to overcome the different challenges from her past and present. The book has landed Mashishi a Sunday Times on the longlist for the 2022 Sunday Times Literary Awards.

Mashishi plans to continue working as a researcher at Africa Check and write another book by 30. She also intends to do her Master’s in Global Health Policy.

At the core of her work, Mashishi ensures that accurate news is delivered to audiences to help them make informed decisions about their lives. She also believes that journalists need to make an effort to understand science and health issues, especially before reporting on them. 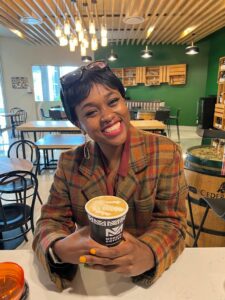 Shandukani Mulaudzi completed her Journalism Honours Degree at Wits in 2013. At the time, she was the student journalist of the year and court reporter of the year. She went on to secure a place at Columbia University, where she finished in the top 15% of her class.

Mulaudzi was selected in the Arts and Entertainment Category of the M&G200 Young South Africans, not just for her work in media but for her recent venture into the arts space.

She runs Studio Nxumalo Contemporary, a visual arts curation studio which seeks to empower and recognise African artists in the country. She believes that talented black artists lack access to the arts spaces due to a lack of funding and other structural issues, and she seeks to tackle those problems through her studio. She is also the communications officer at Mozilla Foundation, an internet rights NPO.

“I’ve done so much since graduating and I love how Wits prepared me to pivot in between different spaces,” she said.

Mulaudzi got into journalism while doing her undergraduate BComm degree at Rhodes University, first as a DJ and music manager at Rhodes Music Radio (the campus radio station), and later as an intern at Sunday World.

Thereafter, she worked at YOU Magazine, Finweek, City Press and Huffington Post, covering a range of topics.

“While there [City Press] I covered amazing politics stories with Sithembile Cele, arts stories under Charles Blignaut’s leadership and also broke the PTA girls racism stories which opened up a can of worms regarding all sorts of other racism at former model c schools and even at black schools”.

Following her stint at City Press, she worked at Huffington Post South Africa as an engagement editor.

“I was doing amazing work – my favourite story was about the Decolonised National Anthem but my most successful stories were 1. A personal essay I wrote about sexual violence in South Africa. It was “The First Time I Saw A Penis I Didn’t Want To” and then a story I wrote about Yvonne Orji which I wrote at HuffPost in the week I got suspended.”

She later freelanced at The Big Debate, Power FM, and Inside Education and worked as a content producer and in communications in a number of different spaces.

Working in the field for a number of years, Mulaudzi says journalism has become a toxic space, and mental health issues need to be taken seriously.

“What makes the media one of the most toxic spaces however is that while we want to talk truth to power we allow things like The City Press 6, The HuffPost Ghost and now The New Frame 31 to happen without holding ANYONE accountable. It’s dangerous. Young journalists are alcoholics, at Akeso, or leaving the industry entirely because journalism is TOXIC (sic)And this is not a South African problem – it is a global problem.” 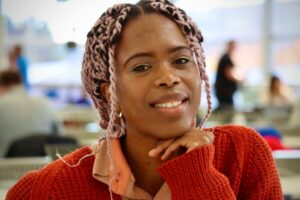 Onke Ngucka was named upcoming journalist /rising star of the year at the Sikuvile Journalism Awards 2022 – sponsored by Standard Bank and hosted by the South African National Editors’ Forum in Johannesburg on 26 June 2022.

Ngucka completed her Journalism Honours Degree at Wits Journalism in 2018 and now works at the Daily Maverick where she focuses on climate and environmental issues. Before this, she interned at Reuters for a year, spending half of it as a financial and general news reporter and the other half as a producer for Reuters TV.

In 2021 Ngucka took up a fellowship which was a partnership between the Rosa Lux Foundation and the Young African Journalism Accelerator Programme on climate justice. In November 2021 she was awarded a Climate Tracker Fellowship to cover COP26 in Glasgow, Scotland.

Ngucka also went to Kenya to report on the United Nations environmental assembly where the first legally binding plastic ban was adopted. She plans to focus on climate and environmental stories and do more stories that have an impact and are more human-centred to put that face on the climate crisis.

To aspiring journalists, she says join the industry if you genuinely want to make a contribution to South Africa, especially noting the struggles the country is facing right now.

Mashishi, Mulaudzi and Ngucka join a long list of Wits Journalism alumni who have been awarded and recognised for their contributions to the South African media landscape and the country as a whole.