The Wits Centre for Journalism and the Valley Trust hosted the 16th Annual Taco Kuiper Awards for Investigative Journalism on 12 April 2022 at the Wits Club.

The joint winners of the 2021 Taco Kuiper Award for Investigative Journalism were:

Pieter-Louis Myburgh of Daily Maverick for Digital Vibes and,

This is what the Judges had to say about their work: 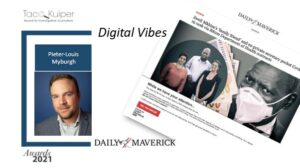 “Pieter-Louis is a familiar face at these awards, this year for the series of stories that over several months built up a picture of corruption in the
Health Ministry’s Covid-19 communication operation. Through dogged persistence and digging, he pieced together the sordid mess of ministerial
friends and family members who benefited from over-priced communications contracts. The detail was meticulous and good graphic added a strong visual element. The exposé led to the cancellation of contracts, saving millions, and the axing of Health Minister and presidential contender Zweli Mkhize. Such brazen corruption during a pandemic caused genuine shock and horror, and hopefully will still lead to some trials and convictions.” 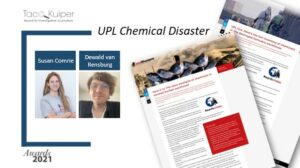 “Susan Comrie and Dewald van Rensburg of our regular entrants, amaBhungane, for the UPL Chemical Disaster. This pair of reporters were alerted by a tweet about the chemical fire at the UPL plant in Durban during the July riots and looting. They were spurred on to dig deeper – as is often the case – when the company refused to give basic information about the chemicals in its warehouse. As it unfolded, it became clear that the scale of the disaster was enormous as the toxic mess spread around the area and washed into the sea. When the reporters got their hands on the full and frightening list of chemicals and what harm they could cause, they chose to share it all in the public interest, giving the public full access to this valuable information. Their reporting raised important questions about how this material could be stored next to a school and whether the state had been negligent in dealing with it.”