The study which is part of the Consortium for Human Rights and Media in Africa (CHARM) project and was conducted by the Fojo Media Institute at Linnėuniversitetet in Sweden and Wits Journalism at the University of the Witwatersrand, in Johannesburg. 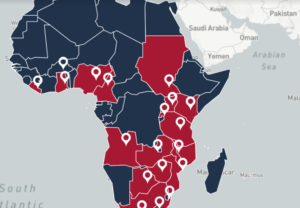 The study’s report said “it’s evident that there is a resurgence of investigative journalism in some countries and regions in sub-Saharan Africa with a number of hubs emerging to join the league of old established media outlets that have produced journalistic work, many winning international recognition”.

The report noted that there were some countries where investigative journalism hubs faced police and economic pressures, while in other countries initiatives of this nature were not possible, altogether. “Activity has spread in the more ‘open’ countries with established traditions of investigative reporting, such as Kenya, South Africa, Nigeria and Uganda, but they have also sprung up in places where conditions have been tough for journalists, such as Mozambique, Rwanda, Cameroon, Tanzania, Sudan, Ghana, Liberia, Burkino Faso, Zimbabwe, Zambia, Lesotho, Malawi, Swaziland and Angola,” said the report.

The hubs, which are small, independent, non-profit clusters of a small number of dedicated journalists, work parallel to traditional investigative journalism newsrooms, the study found.

“Most of these units are supported by international donors, foundations and networks, raising questions about their long-term sustainability. But it has meant a rise in the quantity and range of investigative reporting done in sub-Saharan Africa,” the report said adding that “sustainability, remains ‘shaky’, as most of these organisations report their main sources of income being ‘grants from local or international partners, philanthropy organisations and special interest groups’”. They report adds that “some hubs have alternative ways of supporting their work, including selling of journalistic packages to third-party media outlets, advertisements and consultancy”.

In recent year, the hubs covered stories that included organised crime and violence, health, drug trafficking, illegal wildlife transactions and human trafficking, according to the report.

He said hubs were needed in the region since newsrooms of established media did little investigative journalism.

Should you have any contribution to make with regards to the subject matter, please email anton@harber.co.za.