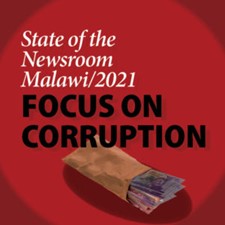 Malawi has launched its first edition of the State of the Newsroom report.

The State of the Newsroom is an annual report that has been published by Wits Journalism, in South Africa, for the past several years discussing issues in the country’s newsrooms.

The objectives of the report are to foster an environment of debate around key issues that have an impact on the news media and the practice of journalism in the country, to encourage critical self-reflection amongst media practitioners, with respect to the purpose of journalism in supporting and sustaining democracy; and to serve as a publication of record. This is done by producing research-orientated yet accessible articles, as well as commentary from media experts working in the field. Wits Journalism academic, Alan Finlay, has been the leader of the State of the Newsroom report project.

Malawi’s first State of the Newsroom report focusses on corruption in the country’s media, but also discusses several other aspects such as dwindling readership of newspapers as a result of their high cover price. Poor pay for journalists and “unstainable” working conditions are also discussed.

Speaking at the launch of the report, which took place virtually, head of Wits Journalism, Prof Franz Krüger, said Malawi’s State of the Newsroom report gave a window into challenges that the media faced in different countries, debunking the belief that media faced the same challenges in all countries. The report talks about a decline in readership, not from the advent of digital media, which was the case in other countries, but as a result of the high cost of newspapers, said Kruger. This showed the complexity of the media on the continent, he added.

Gondwe said the issue of corruption in Malawi newsrooms was of great concern in a situation where a third of the country’s budget was lost to corruption. “What can the media do?” he asked.

Kambalane said the cost of corruption on the economy and individuals was immense, which required concerted efforts to fight it, and the media had a role in holding government to account on various issues.

Takula lamented the fact that corruption in Malawi had been “normalised” and made a way of life. But, he said, journalists had to have a “passion against corruption to be able to fight it”. “Corruption affects us as individuals, even before we become journalists,” said Takula.

Ndanga said the media was in a delicate position because of its ability to expose the corrupt. Unfortunately, she added, journalists in the country did not discuss corruption within their ranks openly. “We accuse each other, but don’t name who is doing it. We name others, politicians and the like, why are we failing to name each other?”

Among the roots of corruption in the media were low pay for journalists and the fact that several media houses were owned by businesspeople who were also involved in politics. Politicians also controlled government resources and sometimes used advertising spend to get media houses to toe the line. This meant that even those politicians who did not own media houses, used their positions in government to influence the media, added Ndanga.

Financial challenges facing media houses also contributed to corruption among journalists, because media owners and their managements turned a blind eye to the practice since they did not have enough resources to pay journalists well, said Ndanga. Some newsrooms relied on outsiders to fund news gathering because they were under-resourced. This compromises journalists, she added.

Lack of job security in journalism was another enabler of corruption, which according to Kambalane, “reduce the commitment of journalists to do their job”. Politicians have capitalised on this, she said, adding however, that the media had to make a choice to reject corruption.

It was not only politicians that played a role in corrupting newsrooms, private sector entities were also involved in frustrating efforts to fight corruption in the country, charged Takula. He said media owners should play a leading role in fighting corruption in newsrooms.

Educating journalists against corruption was one way to fight the scourge, said Ndanga, with Takula concurring that journalism training curricula should include this subject.

The report can be read here: https://journalism.co.za/resources/state-of-the-newsroom/. The Webinar can be accessed here